Maintenance work at the Yellow House has begun.

In the last years Monumentsfund Aruba has been focusing on the maintenance of its monumental buildings. The City Hall, Henriquez building, Wild House and School 1888 have already been through a complete maintenance. Now it’s the turn of the monument on Weststreet which is currently the Arina office and is also known as the Yellow House.

After months inspection and preparation of the specifications and conditions,  Monumentsfund approached four contractor companies to bid on this project. After evaluation was complete the contract was signed with Felipe Construction and Consultancy NV.  The work involves repairment of the walls damaged by salt damp, wall cracks, repairment of the    fence and painting of the complete building.

According to the plan, the work will be completed in September. During the whole process Monumentsfund has been in close contact with Arina , the lessee of the monument. We appreciate their cooperation while the maintenance works are being executed. We also would like to thank the Monumentsbureau for the cooperation on this project.

One of Monumentsfund Aruba’s goal is to preserve the past for the future. We have worked on a long- term maintenance plan to ensure that the monuments owned by SMFA will remain in good condition. 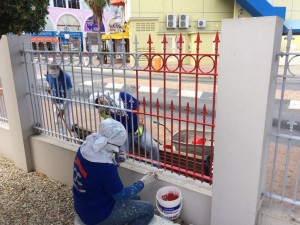