Monumentsfund Aruba will be celebrating its 25th anniversary next year 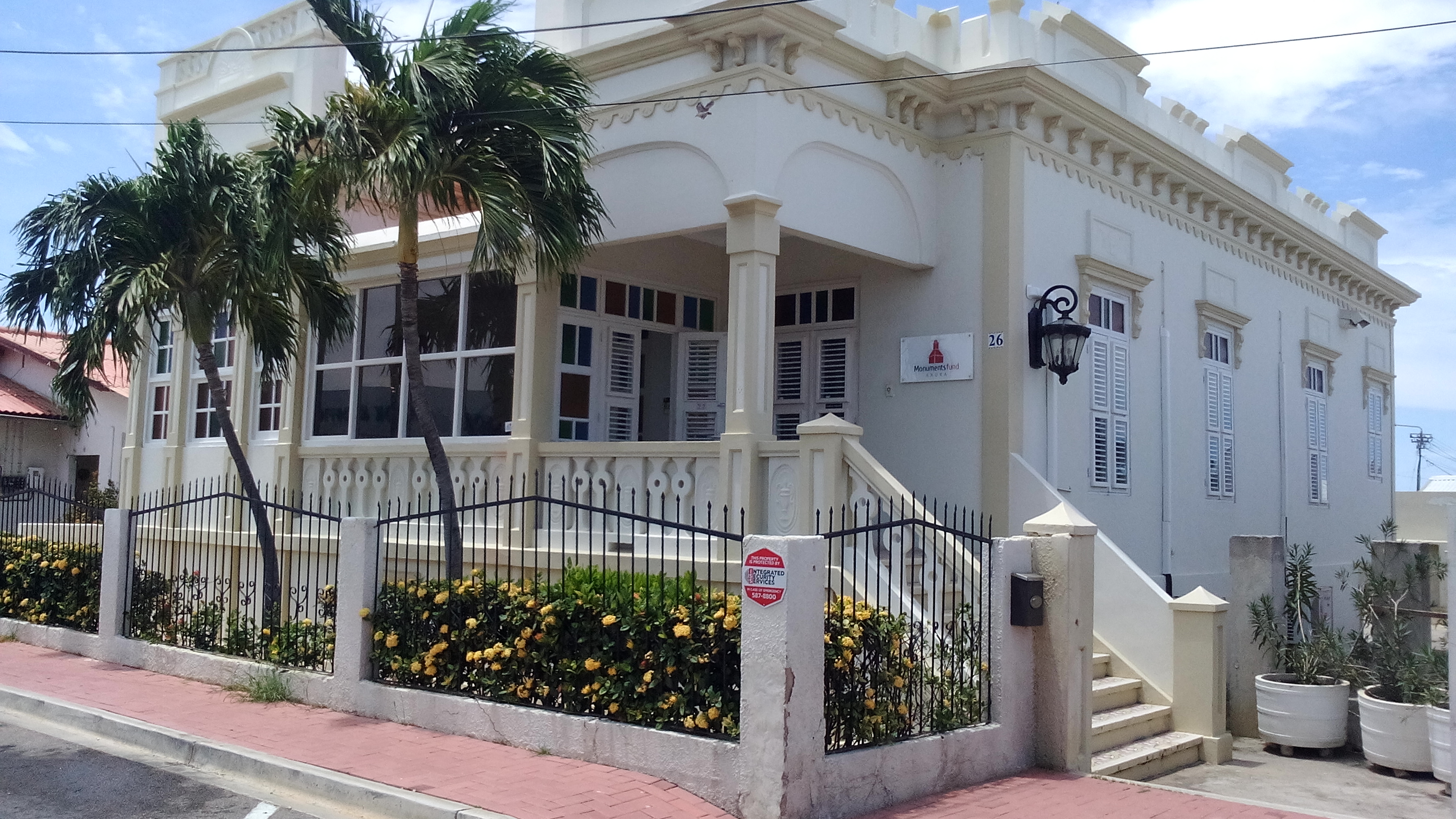 2020 was a year with challenges for Aruba but also for Stichting Monumentenfonds Aruba (SMFA). Many things changed due to the Covid-19 crisis and this was no exception for the Monument Funds. Despite the difficult situation the foundation was able to finalize some projects which are of great importance to maintaining the monuments of Aruba. After the shelter-in-place period, SMFA opted to continue with its planned projects in order to contribute to the economic development of Aruba.

At the beginning of the year, SMFA celebrated the finalization of the restoration of Uncle Louis Store in San Nicolas. This monument dated from the early 50’s has been completely renovated and serves now as the office of the Department of Nature & Environment. This is the third building renovated by SMFA in San Nicolas. This project is also taking part in the ‘Pieter van Vollenhoven’ prize in the Netherlands. This prize is awarded to an organization that takes the challenge of restoring a preserved monument in the Dutch Kingdom and giving it a new purpose or use. The prize has been postponed until next year, but we hope for this building to become the winner of this great prize in 2021.

SMFA also managed to finalize the restoration of the ‘Forno di Kalki’ in Rancho in July 2020. SMFA also signed an agreement with Foundation Rancho, which gives the foundation the greenlight to have this monument incorporated in their tours with the sole purpose of educating and bringing consciousness to the history of community of the Rancho.

Mid 2020 there were also public tenders for the maintenance of three buildings, Henriquez Building at Weststraat 15, the California Lighthouse and the ex-Botica Aruba at Steenweg 19. The maintenance work of the latter was initiated in August 2020 and is being executed by the contractor Van Kessel Havenbouw NV.

For the building at Weststraat 15, better known as ‘Casita Geel’ (yellow house) maintenance has been conducted and the inside of the building had been adapted according to its new renter which is Patio 15, They will officially open in December 2020.

Another monument which got some maintenance attention this year was Henriquez Pand at Schelpstraat in Oranjestad. The building had been completely painted from the exterior, the walls have been fixed and in the interior has been painted as well. The wooden balcony also has been completely restored.

The maintenance of the California Lighthouse will start in 2021.

Another important part of the tasks of SMFA is to bring awareness and education. At the beginning of the year, SMFA was visited by the Curriculum Development Department of The Department of Education. This was part of the project ‘Guest of the Month’, which gives opportunity to different organizations to get to know a little more of the works of SMFA.

A beautiful project conducted by the results of ‘Guest of the Month’ was the installation of the stair lift at the town hall building. Platform for Persons with Limitations held a meeting last year in which they informed of their desire to have more buildings accessible to the disabled and one of them is the town hall. SMFA did research based on this information and was able to make this a reality.

In October 2020, the 5th edition of Wiki Loves Monuments Aruba took place. A total of 742 photographs were uploaded. Ten photographs were nominated to advance to the next round which is the international competition which will take place in January 2021.

Because of the coronavirus pandemic, SMFA was not able to conduct lectures at schools as usual. However, SMFA was able to prepare an audiobook with the title ‘Un Raton den Stadhuis’ (A Mouse in the Town Hall) with the purpose to introduce the word ‘monument’ to the children between the ages of 4 to 8. SMFA sent this audiobook to all elementary schools of Aruba. The audiobook is also available on the facebook page Stichting Monumentenfonds Aruba.

International cooperation is very important for SMFA to comply with its goal of maintaining Aruba’s monuments. SMFA has a good relationship with other colleagues from other Caribbean islands and the Netherlands.

At the beginning of the year Director of SMFA Anne Witsenburg visited different monuments with Minister Knops of the Netherlands to show him some of the most recent projects finalized by SMFA in San Nicolas such as Watertoren, Nicolaas Store and Uncle Louis Store and also visited the Forno di Kalki in Rancho.

Apart from this, SMFA together with Foundation BOEi of the Netherlands is conducting research on the water tanks at Kibaima, Balashi. This project will be subsidized by the Ministry of OCW of the Netherlands. Finalization of this research is scheduled for the first quarter of 2021. For this project SMFA is being assisted by interns of the SUS Ateliers di Hogeschool Rotterdam.

2021 will be a great year for SMFA. The foundation will be celebrating 25 years of existence and is working on some projects to celebrate this with the entire community of Aruba. They are aware of the challenges 2021 will also bring, but with positivism and perseverance they will seek to preserve the past for the future!